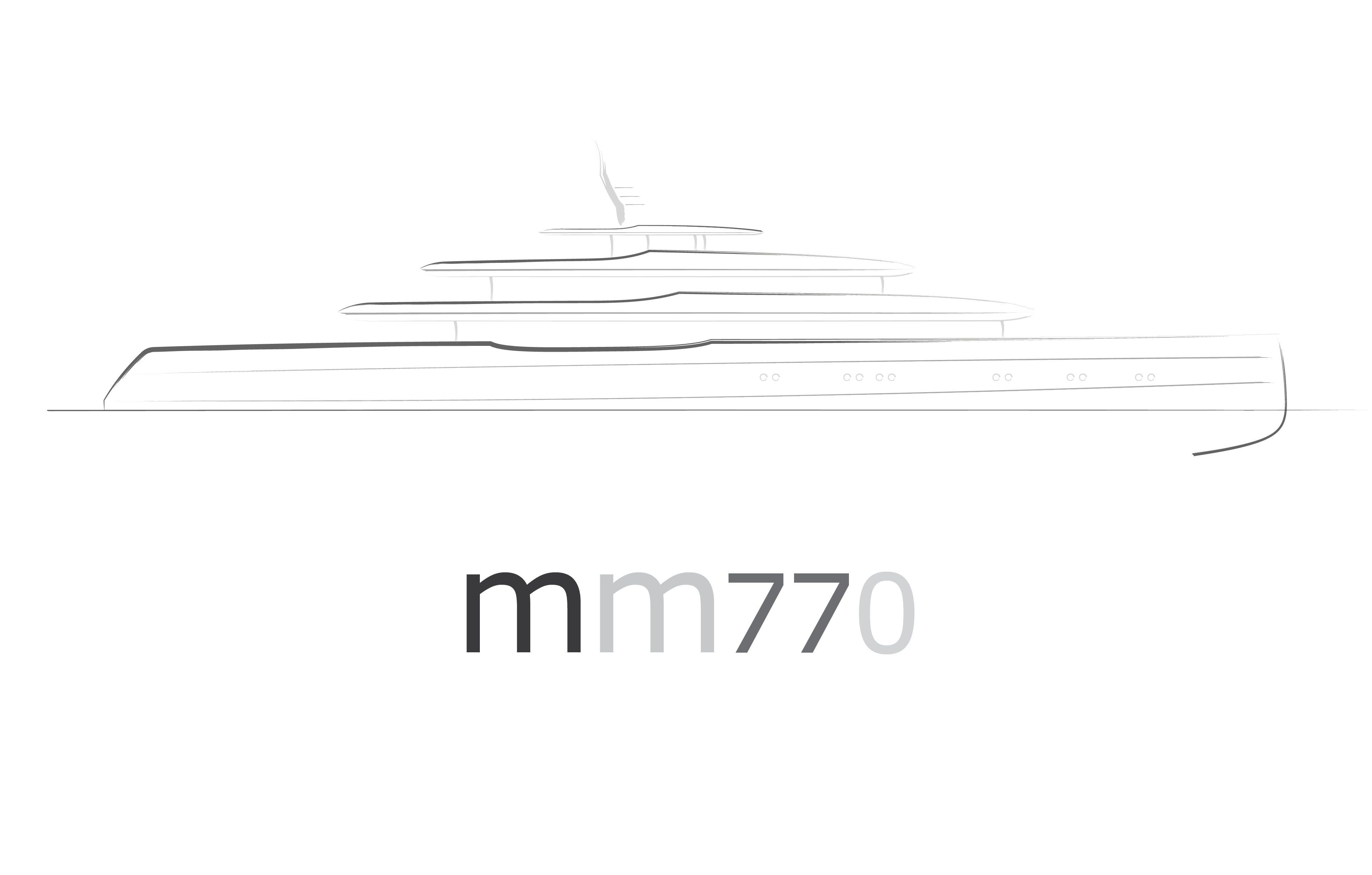 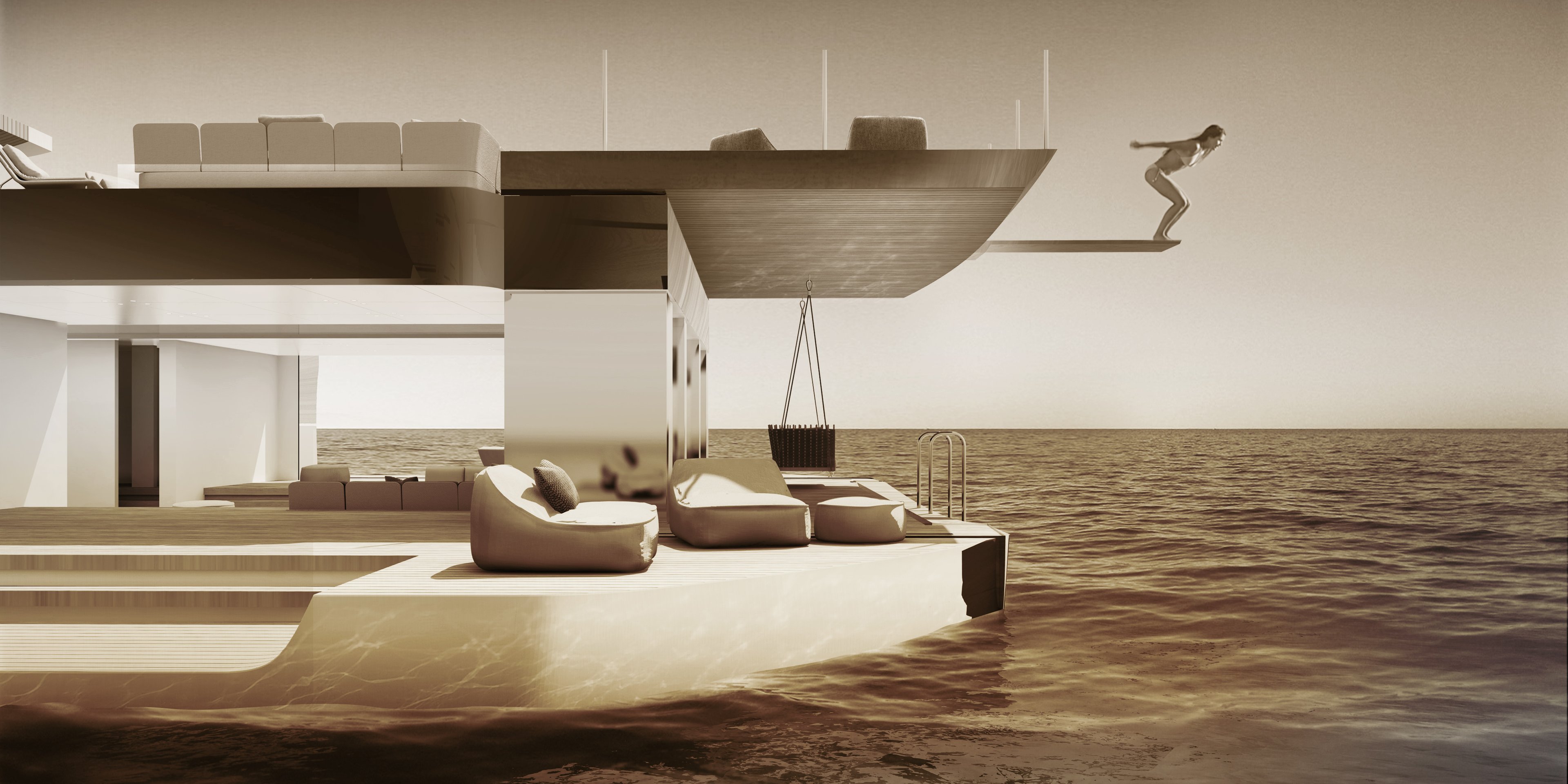 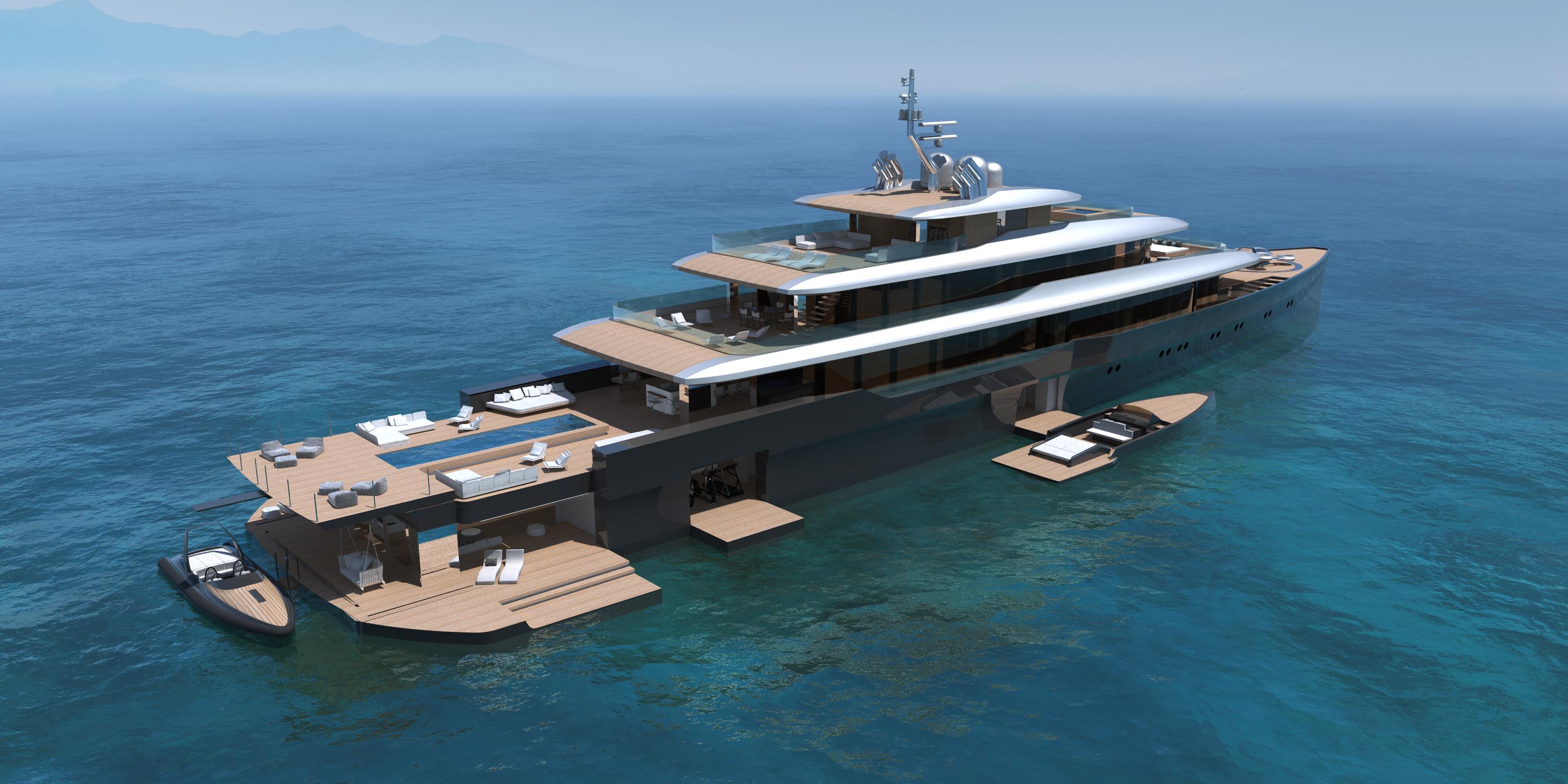 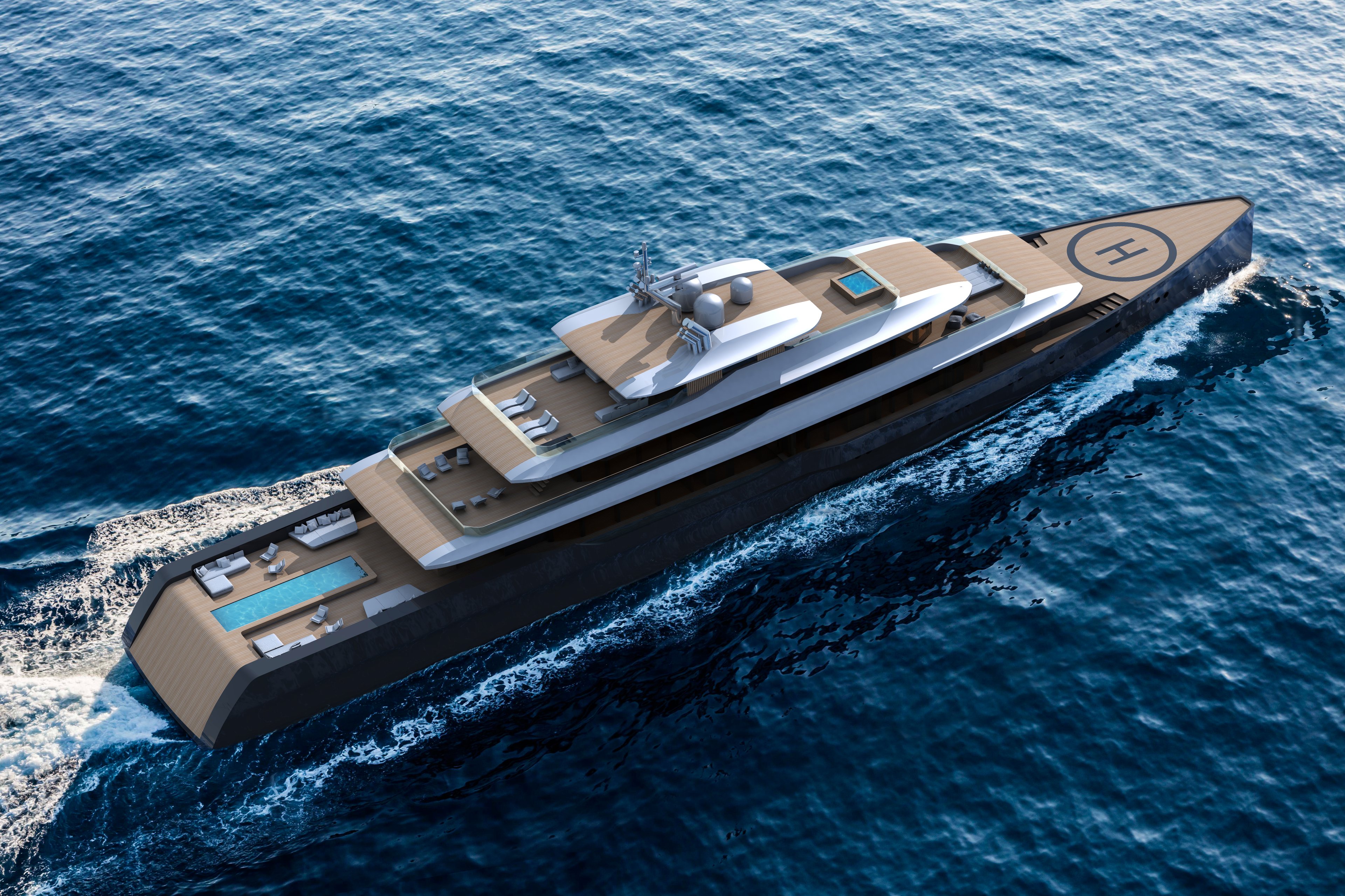 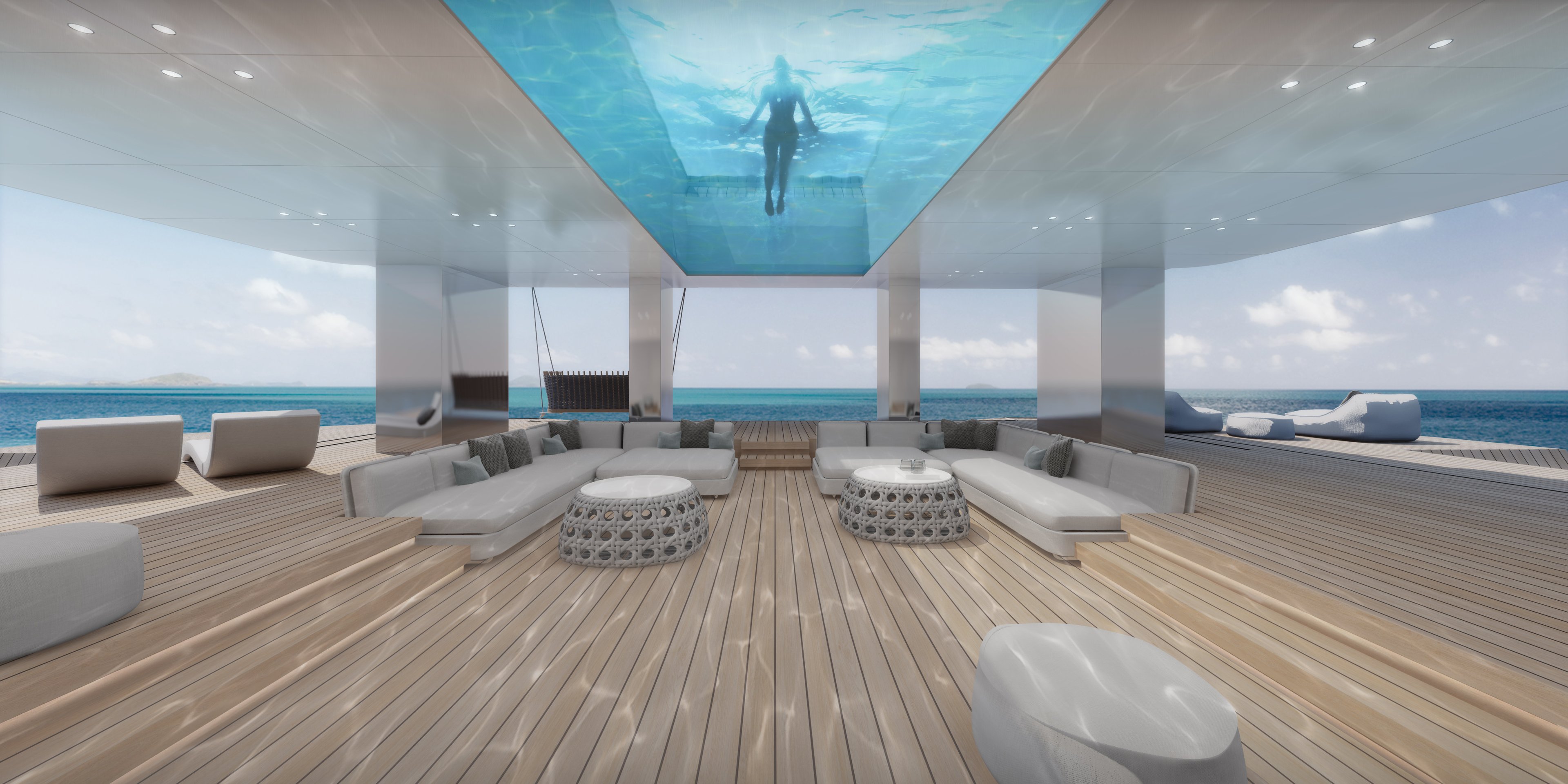 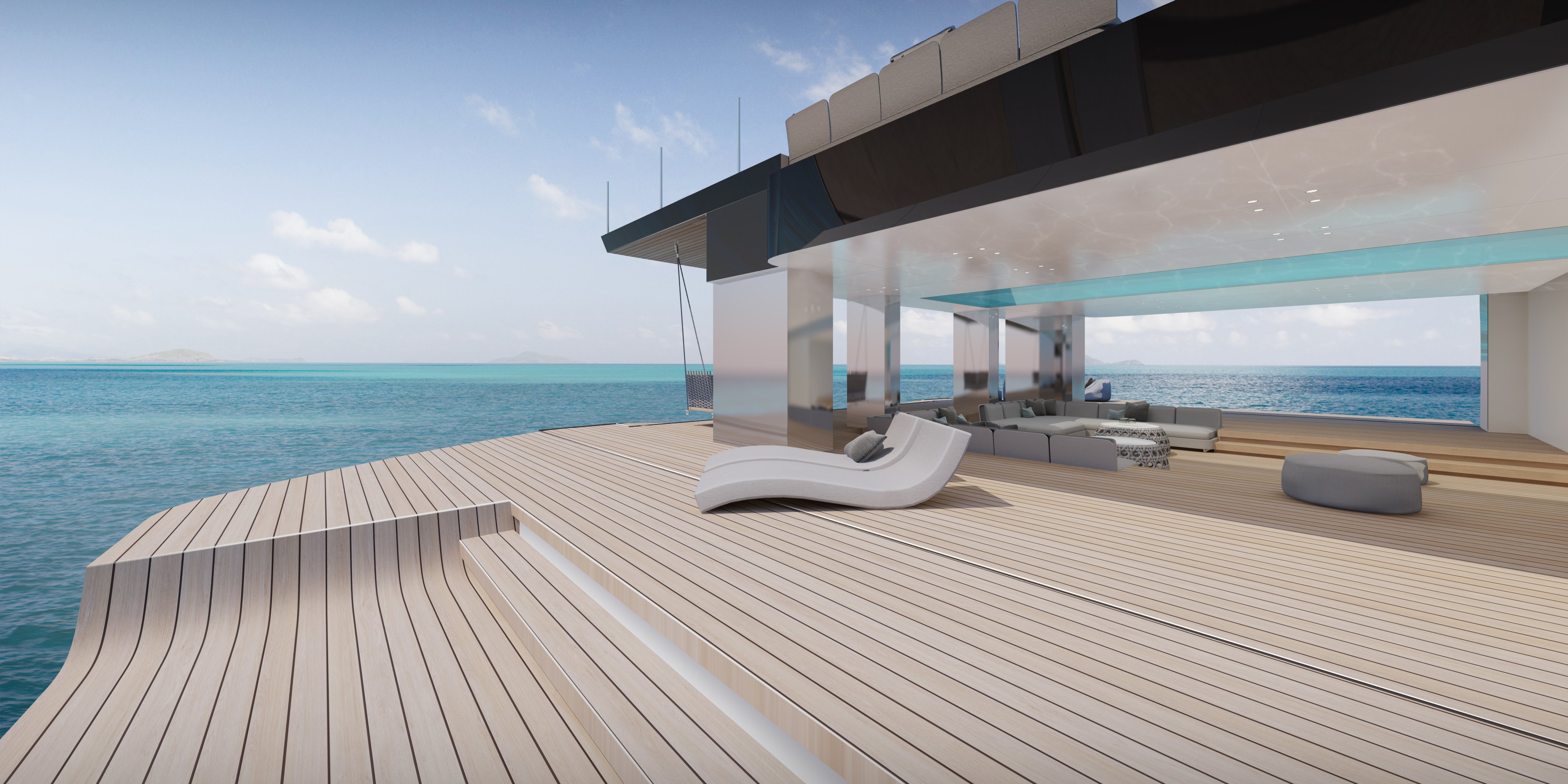 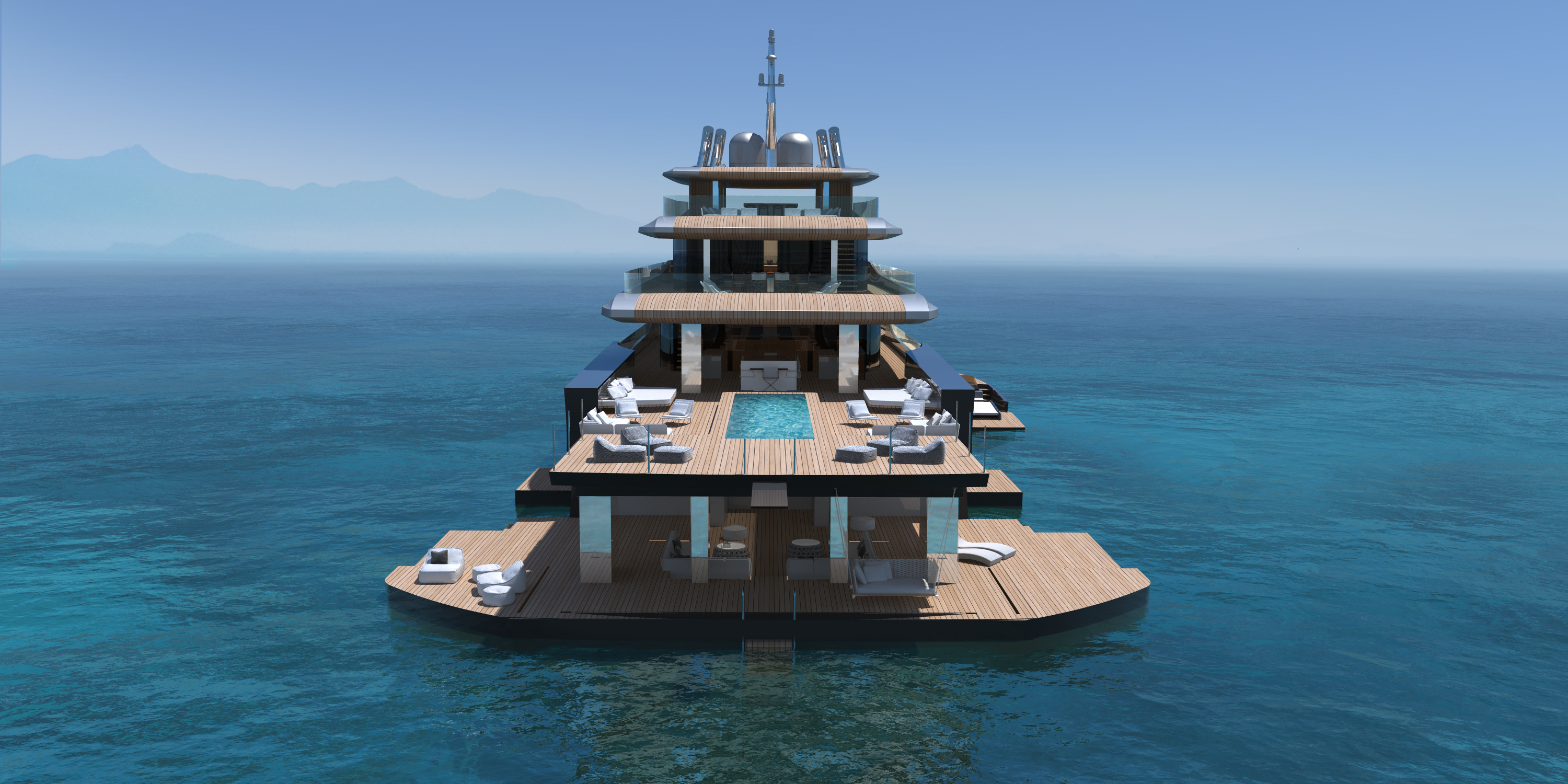 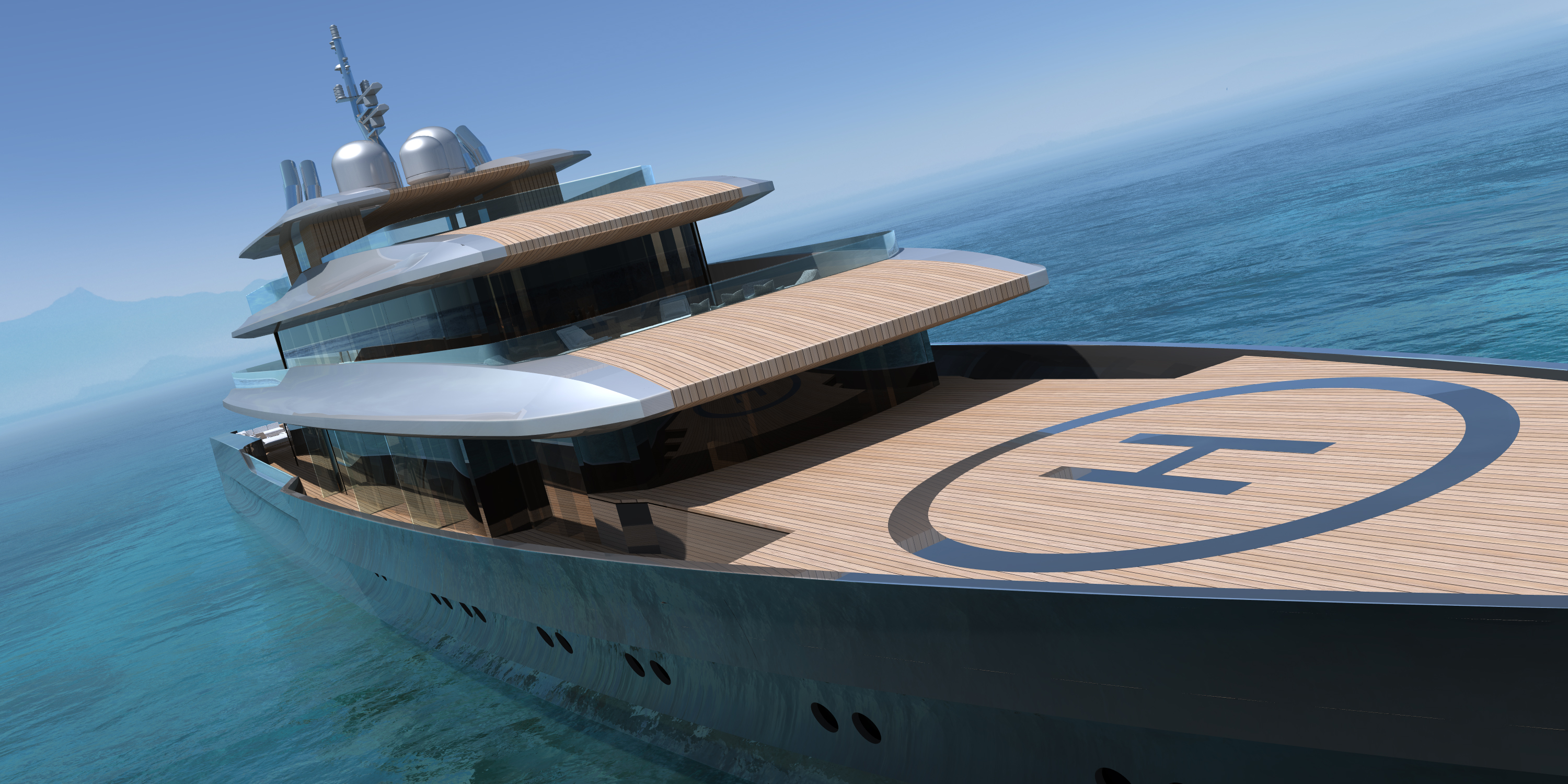 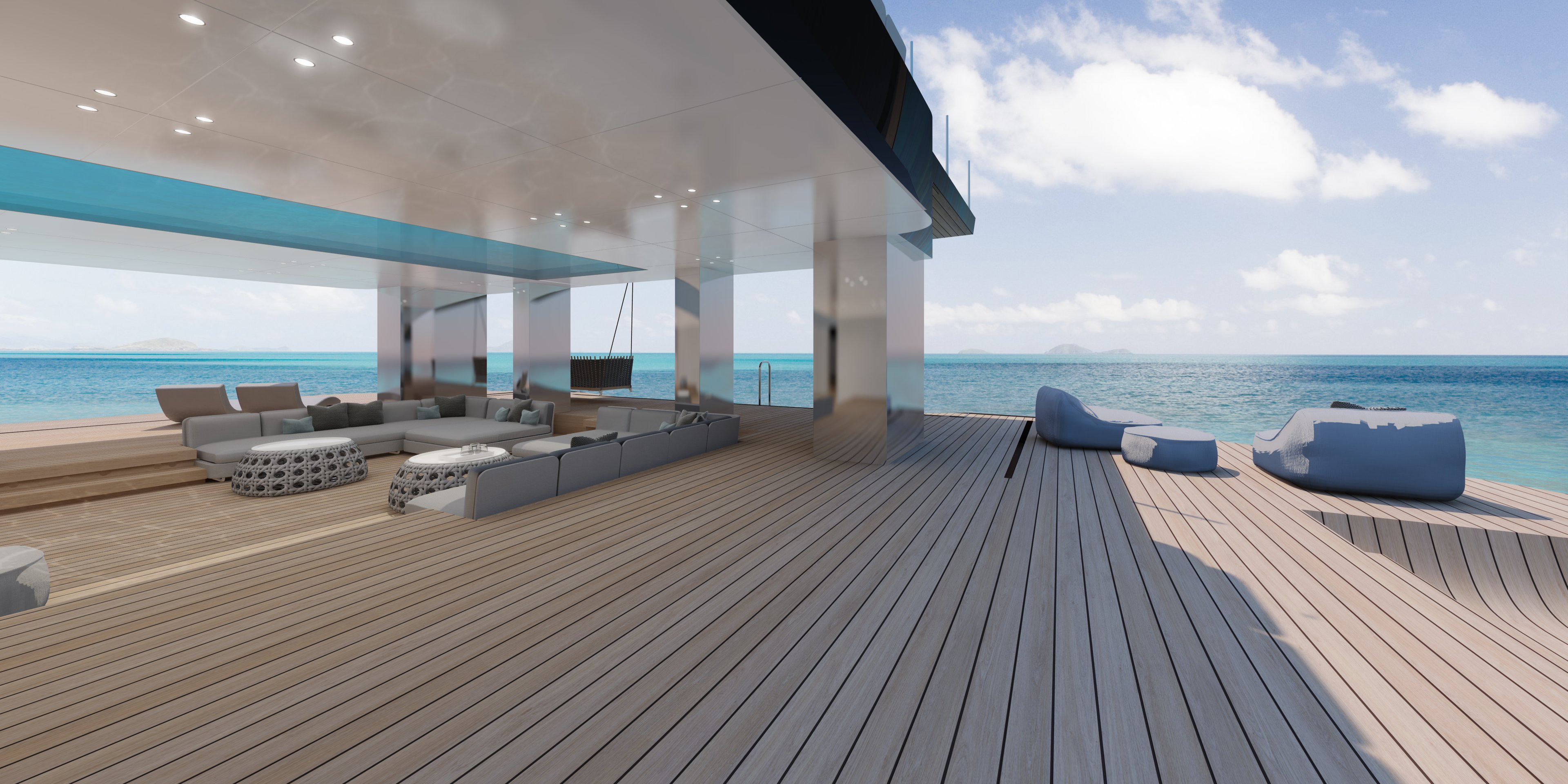 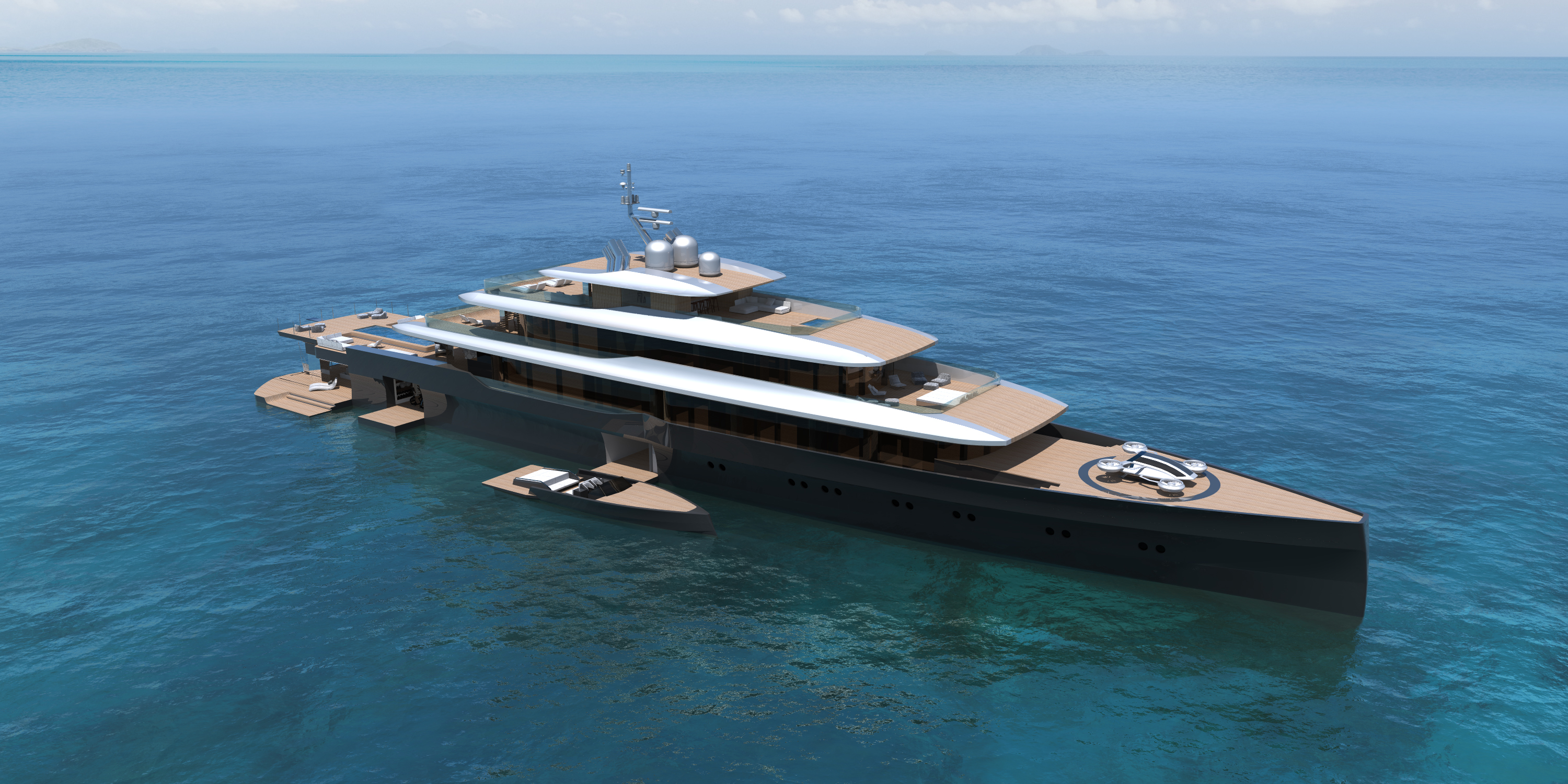 MM770 is a design collaboration between Malcolm McKeon Yacht Design and Mark Whiteley – a successful affiliation that spans the last 30 years – and presents both parties with an opportunity to embrace creative freedom. The design has been developed in close association with Feadship, the shipyard most aligned with innovative and iconic superyachts.

With a nod to sailing yacht design, MM770’s exterior profile features cascading runs of timber that fold over each of the five decks fore and aft in fluid motion. Taking the place of what more commonly is the domain of glass or metal, this natural material interrupts the metal structure and diminishes the visual intensity of the vessel with astounding effect. Continuing from the exterior decks into the yacht’s internal spaces, the timber unites the entire vessel as one with floor-to-ceiling glass often the only divide between the owner and the elements.

Each deck has been attributed a distinct purpose and configured to ensure total segregation between crew and owner/guests, both in regard to general operation and service provision, and when moving around the yacht.

The main deck centres on the guest accommodation and communal social spaces. To aft is an impressive 8.8-metre glass-bottomed pool, an exterior lounge area and an al fresco dining table for 12. Entering the yacht through the sliding glass doors, a spacious saloon awaits – flanked by glass on either side, which can be fully retracted fore and aft to open the saloon sides port and starboard.

One of MM770’s most innovative features is the aft portion of the main deck, which folds down to enclose the beach club and secure the transom when the yacht is underway.

There are four guest suites in total, all of which enjoy full-height glass windows and private balconies. The yacht’s beam on deck has been widened locally to afford the balconies more floor space and the three doubles have been arranged so that the beds face towards the port and starboard sides, and towards the glass. Forward of the guest accommodation is the bridge with adjacent Captain’s cabin and ship’s office.

The foredeck itself not only serves as a helipad but beneath the flush deck is stowage for two tenders, deployed and recovered by crane.

On the upper deck resides a self-contained owner’s suite. This deck is given over to the owner in its entirety, affording complete privacy and autonomy if so desired. The forward-facing master stateroom is encased in a curved wall of glass, the central panel of which retracts to permit access to the expansive private deck. The owner’s accommodation also features his-and-hers en suites, a study and a personal pantry. The sky lounge to aft, with a further on-deck lounge and dining space, can also be excluded from guest use – affording the owner self-contained supremacy.

The elevated views offered from the sun deck can be enjoyed from aft-facing sun loungers, the lounge seating or the forward Jacuzzi. Under the shelter of the fixed canopy, sit two interfacing c-shaped bar counters and there’s also a day head, dumbwaiter and service area. Crew are accommodated on the lower deck. Along with accommodation for a complement of 15, there’s a large crew mess, additional officer’s mess and medical suite. Amidships on the lower deck is the guest lobby and central elevator, which runs from the basement deck up to the owner’s level and beyond the engine room to aft, a watersports store in the port lazarette.

Guests can descend to the lower deck by elevator or via stairs from the main deck, which will bring them to the yacht’s gym, sauna and spa treatment room. This arrangement allows them to transit between the guest accommodation and the beach club without passing through the main saloon. Similarly, day guests can access the beach club and make use of the water toys without the need to pass through the guest cabins. To aft on the lower deck is an incredible beach club arrangement that sees the side bulwarks fold down to form large swim platforms. The ease of access to and from the water is a given but the beach club lounge, situated beneath the glass-bottomed pool and benefitting from uninterrupted views on three sides, is a statement design piece. Advanced engineering has been employed to ensure the structural integrity of this substantial space, and the design takes a more architectural edge as a result - one feels they could be diving into an ocean atop a skyscraper. Adding to the already expansive array of amenities and lifestyle features aboard MM770 is the basement deck, where a 14-seat cinema makes fantastic use of this enclosed space. There’s also a sizeable wine cellar and forward, an additional crew lounge, laundry and purser’s office with a staircase connecting directly to the crew quarters on the deck above.

“When we design a sailing superyacht, establishing a continuous visual connection with the sea is always part of the design brief. Applying that objective to motor yacht design, we have been able to reinforce that principal in new and inspiring ways.” – Malcolm McKeon

“Creating a more architectural interior for this design with MMYD has been an enjoyable challenge. Careful consideration has gone into creating intimate spaces with their own identity and atmosphere. The aim for the interior and exterior living spaces is for the owner to feel she is a home from home on the sea, reflecting the owner’s style in a warm and modern way.’’ – Mark Whiteley

Proposed for build at Feadship, this Lloyd’s registered design has a relatively narrow beam to length ratio, making it more easily driven and more fuel-efficient. Topping in at 1,700GT and offering a speed of 17 knots, this 77-metre masterpiece is ready to commence the next stage of pre-engineering. 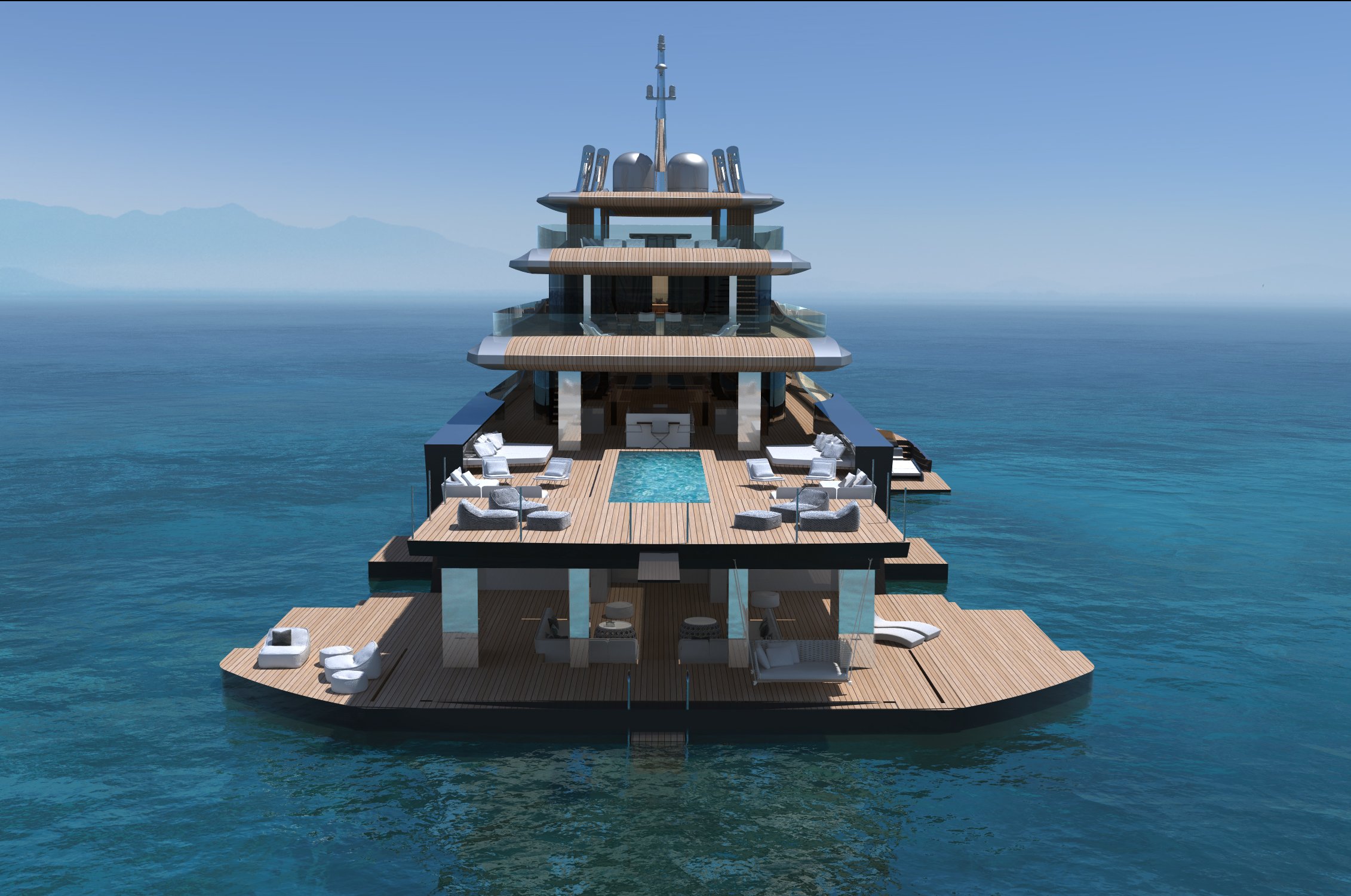